Out of 26 nomads, Bangaloreans had maximum participation, 11 of us who rode down in 3 batches (7+2+2). Shashank & Gaurav decided to stay back, remaining 9 (JSR, Shashi, Kamlesh, Praveen, Parvez, Vasanth, Prabul, Vimal and I) of us decided to cover Goa-Bangalore as few had to go to office next day. It wasn’t easy to get up early, but some how managed to get ready by 0530Hrs. Rain God was still angry with us, it was raining as if the sky had been ripped open. We sat in the Cafe Coffe Day. Preponed our breakfast timings, gulped down coffee and sandwiches in order to save time. 0645Hrs, no sign of rain to stop or reduce. Decided to ride in the rain itself. Visibility was less and our speed reduced because of rain. Crawled through wet twisty roads, one behind the other. 45 minutes into the ride, Praveen had a flat near Margoan. JSR & Kamlesh stopped to fix it and rest of us continued. The group got split in to 3 sub-groups – Shashi, Vimal, Parvez & I in the front. Prabul & Vasanth in the middle. Rest three fixing the flat tire. Four of us in the front continued in the cloudy climate.

Few kilometers before Canacona around 0930Hrs, I got a flat and other three who were in front of me didn’t stop me. Luckily there was a puncture shop near by and got it fixed. While I was getting the tire fixed, second sub-group (Prabul & Vasanth) came. Prabul continued to join the first sub-group and make them wait for rest. After 10 minutes with fixed tire, we set off. It was still cloudy with slight drizzles. And no sign of Sun God. We were soaked to the skin because of continuous rain for more than 3 hours. Shashi & gang were 30-40 minuts ahead of us and JSR & others were an hour behind us. Roads were empty and after we crossed Goa-Karnataka border, straight roads. Both of us road continuously till Honnavar, with just two breaks. Still no sign of Shashi and others. It was already 1300Hrs. Stopped for lunch. While we were having lunch, came others. We had somehow missed Shashi & gang and overtaken them. After a long break at Honnvar, we took a deviation towards Shimoga. Road stretch between Honnavar & Jog is awesome. Riding through the narrow twisty roads, enjoying the River Sharavathi valley – it was a different world. We continued on the narrow roads along with drizzles. Some 10KMs onto the ride, Vimal’s Bull had battery problems. JSR, Kamalesh & Praveen stopped to fix it, rest of us continued. 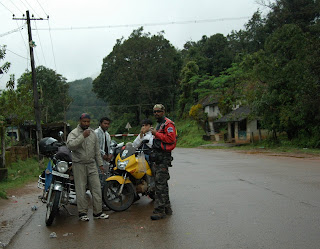 By around 1630Hrs, we were near Jog falls. We were not in mood to visit the place and there was no time, we went on after a cup of tea. 1715Hrs, stopped for snacks at Sagar. By this time sky was bit clear. Changed to dry clothes in a small restaurant, gulped down dosas, idlis, coffee. Set off by 1800Hrs. Stopped at Reliance fuel station to tank-up. With Kamlesh and JSR leading, Shahsi at the back, group rolled on. Reached Shimoga by 1930Hrs. Another butt break and then on the saddles. Took the bypass to avoid Shimoga town traffic, moved on towards Bhadravati. Since we were moving in a single group, our speed reduced since some of us were not comfortable in night riding. Headlights of oncoming vehicles and their ‘dont-care-the-two-wheelers’ attitude was causing problems, as they used to come to our lane while overtaking. JSR suggested to have a zig-zag formation of bikers, covering whole lane of ours to ourselves. That was a brilliant idea, and our speed increased. Soon reached Bhadravati, and then small towns Tarikere, Birur, Kadur. Except for a 25KMs stretch near Tarikere, NH206 is nice and smooth. Feeling sleepy we rode on and finally stopped for dinner near Banavar at a small roadside hotel. It was already 2230Hrs and we were 180+KMs from Bangalore. I was not hungry because of the heavy snacks at Sagar, so settled for 2 cups of tea. I sat on a stone bench outside the hotel, waiting for others to finish off their dinner. Few trucks stopped for dinner and I had company. Looking at the bikes and luggages, they asked me about the trip. And there I was narrating our ride-stories for nth time in those four days.

2345Hrs, 17 hours into the ride. back on the bikes towards. Content with the filled stomach, Kamlesh & Shahsi opened the throttle. Prabul followd them and me behind. Roads were empty with rare vehicles from opposite directions, miles flied by. Passed Arasikere, Tiptur, Gubbi and Tumkur. It was 0200Hrs when we reached Tumkur. 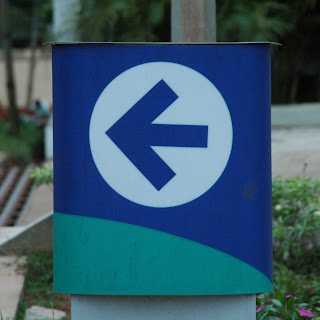 Since I had a day off, I took left turn towards Kunigal and rest 8 continued towards Bangalore. I had another 40KMs to cover at the middle of the night – with not even a single soul around, no vehicle on the road. Just me and my pulsar on the road along with the silently standing trees. I rode as if I’m the King of the roads. I was not in a hurry and took my time. Reached home by 0300Hrs. A total of 20hrs and 15 mins of ride and 650KMs.