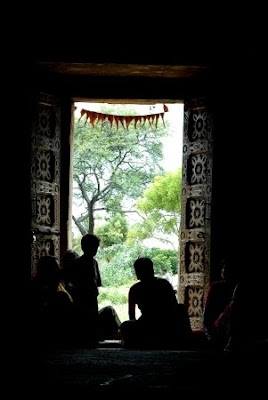 When one hears the name ‘Belur‘, next set of names or words that follow are – Channakeshava temple, Shilabalikas, Halebidu, Hoysalas, King Vishnuvardhana, Jakanachari. Off the list, the last one is less known – Jakanachari, the main architect-sculptor behind Belur & Halebidu. And Kaidala, home town of Jakanachari, boasts of having one of the beautiful statue of God Channakeshava (Lord Vishnu) sculpted by him. Kaidala previously known as ‘Kreedikapura’ got the name as Jakanachari got back his right hand after sculpting & establishing statue of Lord Channakeshava.

Channakeshava temple in Kaidala
You will be disappointed if you are reach there expecting the temple premises to be something similar to Belur or Halebidu. This temple of Lord Channakeshava in Kaidala looks like any other temple from outside. And what seperates this temple from any other temples is the masterpiece by Jakanachari. It is said that the statue in Kaidala is one of the last statues sculpted by Jakanachari. Sculpted in a black stone, the status is 6ft tall & the amount of details & intricacy is amazing. 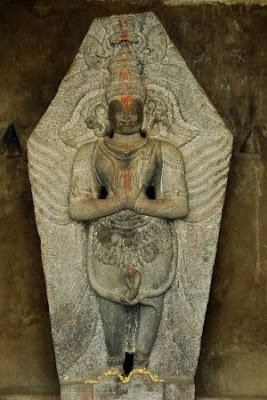 Garuda, the mythological vehicle of Lord Vishnu
The legend says that –

Jakanachari leaves behind his family, wife, unborn child to gain name & fame. Sculpting beautiful statues, constructing temples over a long period of time, all over he reaches Hoysala kingdom where he agrees sculpt deity Lord Channakeshava. Meanwhile his son, Dankanachari leaves home in search of his father. On the day before the Channakeshava idol to be established in Belur, Dankanachari reaches the place & claims that there is a flaw in the statue which was sculpted by Jakanachari. At this time, Jakanachari bets his right hand in case of any flaw in the idol where as his son Dankanachari bets his life. All this happens unaware of their relationship.

Jakanachari cuts his hand after his son finds the flaw – a live frog, water & sand – in the idol. Hence the statue become famous as ‘Kappe Channigaraya’ (Kappe = Frog in Kannada). Later Jakanacahri gets a vision to construct a temple at his home town. Both father-son duo move to Kaidala where it is said that Jakanachari got back his hand after he completed the statue. 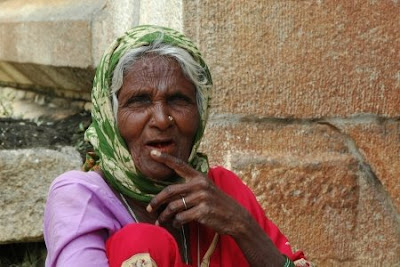 Unfortunately the temple in Kaidala is stranded with no one to take care except for the priest & couple of old ladies who clean up the premises. And the legend mentioned above was as narrated by the priest.

PS: Photography is not allowed inside the temple