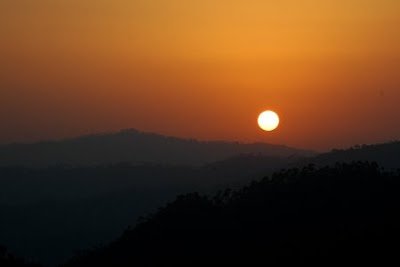 By the time we reached the resort in Binsar it was post noon. Only negative point about Binsar is the amount of time needed to reach the place. It took 20 hours to reach the place which included 6 hours journey by taxi. We were warned before about the journey time & I thought day one at the resort would be spent getting some rest from the journey. On the contrary, there was no sign of tiredness at all (blame the mountain air 😉 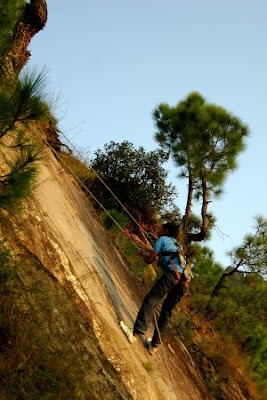 Hours after we reached our destination, we were out on the mountain roads for rock climbing in the evening. Though so many events happen around Bangalore on rock climbing, I never got a chance before to try my hand. It looked so-damn-easy when we saw the demo by the experts. With Sun setting down behind mountain ridge, one by one went up & came down, sweating out. And we had spectators too.

The mountain weather during day time at Binsar reminded me of our good old Bangalore in winter mornings. A pinch of chilly when in shadow & a soothing prickle by the Sun when in open, with nights being much colder. 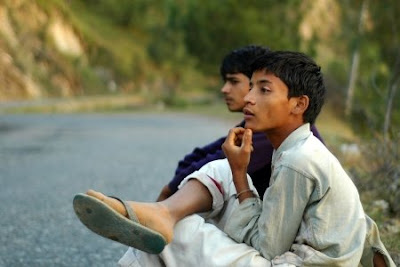 Next morning we decided to go on a morning walk/trek to catch the glimpse of first rays & view of Trishul parvat (a Himalayan peak visible at certain places in Binsar valley). We went on an adventurous trek/walk before returning to the resorts. We took our own route through the pine trees to reach Manipur villa where a second Club Mahindra resort is coming up. While returning we reached the resorts as if like an arrow is shot, in straight line, crossing all the hurdles which came in between which made the trek back more adventurous.

Other published articles on Binsar: