<< Prev | Beginning of the trek 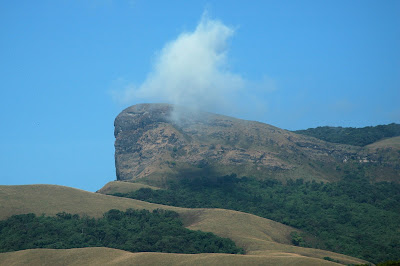 Kuduremukha peakThe day started early. It was cold. After finishing our daily chores, we started our hike to Kuduremukha peak around 6.30AM. Initial stretch is an easy one, almost flat & no gradients. We walked one behind the other on the path chatting continously, stopping for photos here and there. Landscape around us was amazing & breathtaking. We reached Lobo house (Lobo mane) by 8. The peak was clearly visible from that place. A quick break & refreshments, we continued. 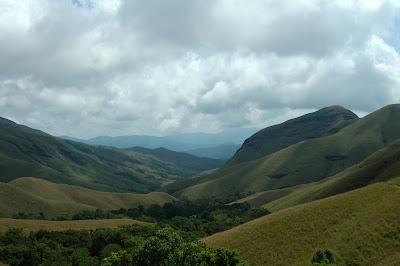 View from Onti maraThough it’s referred as Lobo house, there 4 houses close by which were constructed by one Mr. Lobo during pre-independence era. When we reached third house someone noticed a guava tree next to the house. End result, we spent almost half an hour there. And when we continued from there, not even a single fruit was there on the tree :). From there on the route gets tougher and the group of 10 got split into smaller ones depending on the speed. We passed through sholas & the grass covered slopes slowly and reached ‘Onti mara’ (the lonely tree) by 9.45. And that’s where I got a chance to see a Male Sambar. ‘Onti mara’ is a lonely jamun fruit tree en route KM peak. There are no any trees nearby at that altitude. We three were the first to arrive, rest of the gang was way behind, tree was full of jamun fruits. And by the time everyone arrived we had plenty of fruits. Once everyone arrived at the scene & after breakfast, we continued our mission & ate some more of Jamun fruit. 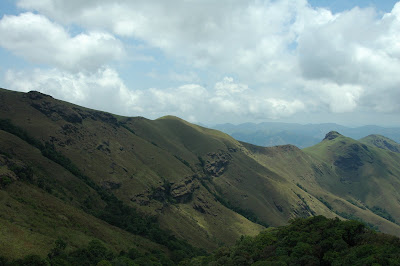 After a long break we started from ‘Onti mara’. Path from there onwards is much steeper & again the group got split into smaller ones. Next stop was near a small stream in a shola. Though it was summer, water was trickling down and the water was refreshing & cold. Another long break there & we moved ahead, along the zig-zag path, inching towards the peak. When it was more than 2KMs to the summit, we were greeted by blood sucking insects bigger than house flies in size. They attacked us in huge numbers, we had tough time with them. As we moved towards the summit, cool breeze & clouds welcomed us. 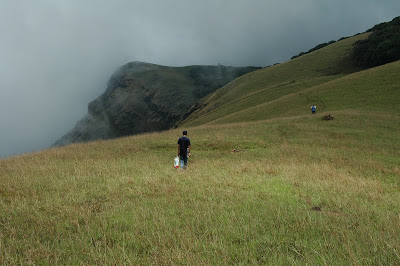 Reached the peak by 1PM & it was completely misty. It was an amazing sight sitting at that height and watching clouds play hide & seek. We spent a good one & half hours there – lunch, lazed around, listened to some philosophical speeches, dozed. By 2.30, we repacked & started home. Trekking down was faster and by 4PM, few of us were near ‘Onti mara’ while resting of the gang was coming slowly behind. We feasted again on the jamun fruits & continued. With the help of gravitational force, we moved down quickly and to our surprise we found a mango tree near Lobo house. We had somehow missed this while trekking up. It was time for us to show our skills at throwing stones at the fruits – end result 3 mangoes, one each for us 🙂 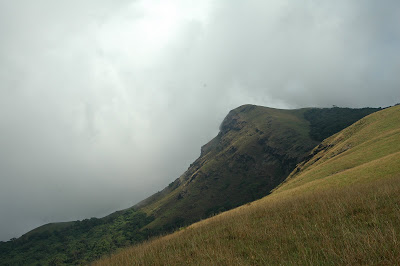 While rest of the gang were still behind, we reached Mullodi village by 5.30Pm and headed straight to Somavathi falls to have a dip. Another round of slipping & sliding, a refreshing bath and we came to Sathish’s house. We did a phone-booking for a jeep to transport us back to Basarikallu gate where our vehicle was waiting. 13 (including jeep driver) of us with 2 tents, 5 sleeping bags, 6 sleeping mats & 11 backpacks – stuffed into a single jeep. It was fun drive back on a bumpy road & took us half an hour. Our vehicle was waiting, we dumped our luggages & headed straight to the nearby hotel. Wonderful dinner – Dosas, rice, sambar, curd, tea, bananas. And we started back to Bangalore. The end of an amazing trek.